Heartbeat dynamics and its spontaneous fluctuations are directly controlled by autonomic nervous system (ANS) outflow to the heart. Specifically, the multipath feedback system for neural control of the heart is manifested by the complex interaction between the sympathetic and parasympathetic (vagal) limbs of the ANS.

Electrocardiogram (ECG) analysis has received great attention from clinicians ad physiologists and the study of Heart Rate Variability (HRV) has been considered as a powerful tool to assess the ANS activity. HRV can be derived from the ECG signal after a pre-processing consisting in artifact removal and QRS complex detection.

The standard approach, used to study HRV, consists in time and frequency domains analysis. Power spectral analysis methods, applied to HRV, were considered to be useful to understand the autonomic control of RR interval fluctuations and to predict cardiovascular diseases, as acute myocardial infarction.

However many issues have arisen, due to the extraction of information from HRV in order to discern psychological states and emotions. At the same time, many evidences in the literature showed that physiological processes involve nonlinear frequency modulation or multi-feedback interactions associated to long-range correlations.

After the Task Force of 1996, novel techniques have been developed for HRV. Many of these methods are part of nonlinear analysis and use transformation techniques, inspired by the phase space theory. Many nonlinear parameters, extracted from autonomic signals, have already been used as markers of aging and presence of diseases.

Nonlinear ANS dynamics have been demonstrated to be involved in the evolution of basal mood states, in healthy and pathological subjects, as bipolar patients.

Bipolar disease is a significant source of disquietude, suffering, disability and in some cases, loss of life through suicide. Four main states of mood can be recognized in the bipolar disease. Specifically, the euthymic state is the "baseline" level of mood, this state of the mind is the positive balance of moods, characterized by serenity or neutrality. Afterwards, depression can be seen as a state marked by sadness, anxiety, feelings of guilt, loss of interest in activities and suicidal thoughts in some cases. Maniac state is distinguished by an overly happy or outgoing mood and extreme irritability. Hypomania is a less severe form of mania, whereas in mixed state, subjects experience both mania and depression at the same time. 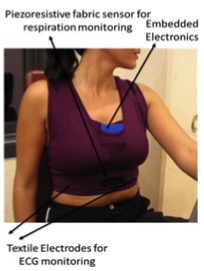 Comorbidity associated with bipolar disorder is an aspect that should not to be underestimated, and scientific literature suggests to see the bipolar disorder as a multi-system inflammatory disease, reviewing this disease as a "disorder of the brain and the body".

A long-term ANS monitoring of bipolar patients was performed in the framework of PSYCHE European project (Personalised monitoring SYstems for Care in mental HEalth, FP7/ICT, Grant 247777), through a comfortable textile-based platform, produced by Smartex srl (Prato, Italy). It was comprised of a sensorized t-shirt (see Figure 1), which was able to acquire ECG, HRV, and respiration activity, along with an embedded electronics able to store and send the acquired data. Applying Multiscale Entropy (MSE) algorithm to the RR series of bipolar patients it was verified a significant loss of complexity during the depressed and maniac states, in comparison with euthymia (see Figure 2).

Also the immediate autonomic response to affective computing protocols of sensorial stimulation can be described by markers extracted from nonlinear analysis of HRV. Lagged Poincaré Plot (LPP) analysis is a technique, derived from the return map theory, which allows to observe the short-term and long-term correlations of RR intervals fluctuation at different lags and also using ultra-short windows. Through this method the sessions with emotional arousal taken from experimental protocols of sensorial stimulation (e.g. emotional sounds elicitation) can be recognized from the neutral sessions or the resting states (see Figure 3).

The utility of MSE algorithm has been assessed to identify changes in EEG dynamics, for example in patients with Alzheimer's disease, that was correlated to cognitive and behavioural dysfunctions. Another important way to measure emotion and stress is made by the combination of HRV and EEG. There are several studies about the EEG-HRV coupling, which show a time-variant correlation between EEG frequency band activity and HRV, e.g. during paradoxical sleep  and across sleep stages.